Sometimes your coop can get a little smelly, which can be a little embarrassing. What’s the scoop on coop odors, and how can you help your hens live their best lives by reducing odors in their home?

Although chicken poop can be stinky, the most likely culprit for coop odors is the colorless gas ammonia. A combination of hydrogen and nitrogen, ammonia has a sharp, pungent smell, similar to vinegar.

Chickens that are exposed to this gas can develop permanent damage to lungs and eyes and will avoid the coop if levels are too high. Ammonia can cause damage at very low concentrations, which are below the level that the human nose can detect. So, if your coop smells like ammonia, clean it immediately!

While cleaning is a quick solution, there are several longer-lasting measures you can take to eliminate odors and make your coop a more pleasant place for you and your birds.

A dry coop will lead to happy, healthy hens. Moisture in the coop not only can contribute to ammonia odors, but also lead to conditions that favor parasites and bacteria. To keep moisture low, use the following tips: 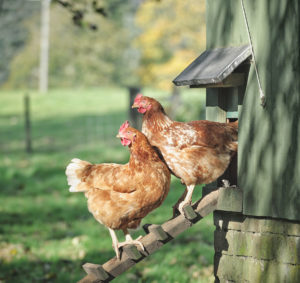 Your choice of feed can also reduce coop odors. Odor can be caused by waste protein from undigested feed. You can combat these smells by choosing feeds with the following plant extracts and essential oils:

Remember that if you make a change to a new feed, switch slowly from your current feed to ease the transition, and help your birds feel more comfortable with the change.

Wondering if raising chickens in your backyard is right for you?  Find answers to some of the more common questions in this video featuring Nutrena Poultry Specialist Twain Lockhart.

Have more questions or comments?  Leave them here in the comments section!